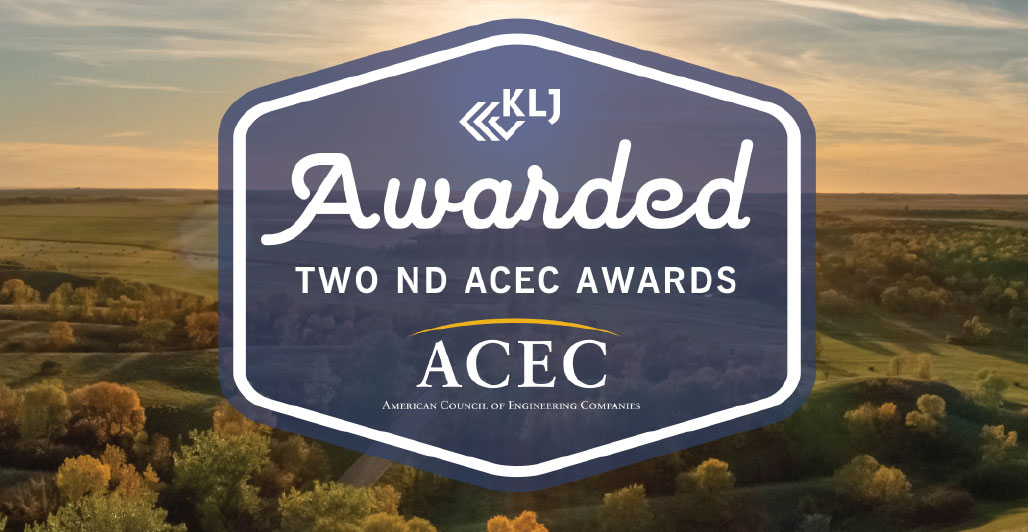 KLJ is proud to announce that the firm has been awarded two American Council of Engineering Companies of North Dakota (ACEC/ND) awards for work on the Devils Lake Downtown Revitalization Project and Ground Transportation Center Parking Garage in Fargo. Each project was rated on uniqueness and/or innovative application of new or existing techniques; future value to the engineering profession and perception by the public; social, economic, and sustainable development considerations; complexity; and successful fulfillment of client/owner’s needs, including schedule and budget.

The Devils Lake Downtown Revitalization Project received award recognition in category I: Special Projects. In support of Governor Doug Burgum’s Main Street Initiative, the City of Devils Lake, ND sought to establish a new, welcoming character to its historic downtown. Devils Lake engaged KLJ to revitalize miles of historic streetscapes, update infrastructure, and create an inviting pedestrian experience capable of driving economic activity and reinvigorating the City’s downtown area. The partnership between KLJ, the City of Devils Lake, and community stakeholders resulted in a downtown that is now attracting businesses and creating a vibrant experience for the City’s residents and visitors. Paul Bjornson served as the project manager.

In downtown Fargo, the Ground Transportation Center (GTC) serves as a major hub for MATBUS, a public transport bus system serving the Fargo/Moorhead metropolitan area. The GTC and the adjacent Fargo Municipal Court building sit atop an underground parking structure. As part of ongoing engagement with the City of Fargo and MATBUS – including a study outlining a 20-year plan for MATBUS operations and plans for major renovations to the GTC, KLJ identified critical repairs to the underground garage. These repairs helped preserve the structure’s integrity and its longevity as well as the longevity of the structures above it, critical elements of the Fargo community. Cassie McNames served as the project manager.

The awards, which were presented during the ACEC/ND annual awards banquet in Bismarck, recognize projects that exhibit excellence and ingenuity.