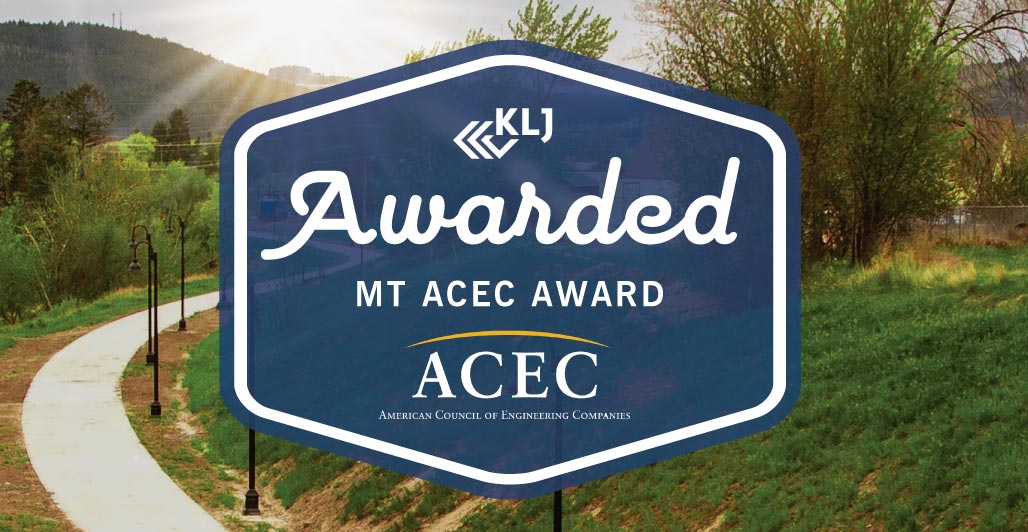 KLJ is proud to announce that the firm has been awarded a National American Council of Engineering Companies (ACEC) Honor Award for work on the Kalispell Core and Rail Redevelopment project in Kalispell, MT.

The national competition recognizes engineering firms for projects that demonstrate an exceptional degree of innovation, complexity, achievement, and value. Projects are rated on uniqueness and/or innovative application of new or existing techniques; future value to the engineering profession and enhanced public awareness/enthusiasm of the role of engineering; social, economic, and sustainable development considerations; complexity; and successful fulfillment of client/owner’s needs. The Kalispell Core and Rail Redevelopment project received the Honor Award in category H: Transportation.

Recently completed, the Core and Rail Redevelopment project is transforming the City of Kalispell. The project converted an obsolete gravel pit (brownfield) into a new industrial rail park; relocated rail-served operations from downtown to the rail park; and replaced the old rail line with a 1.6-mile linear park and trail, along with a new “complete street” and signaled intersection on US Hwy 2.

“The team’s professionalism, leadership, and more than 10 years staff commitment throughout the project gave us confidence to make the right decisions in support of our community, immediately and long into the future,” said Jarod Nygren, development services director for the City of Kalispell.

The $40 MM public-private partnership project has catalyzed reinvestment in the area. By mitigating environmental impacts at more than a dozen sites, and reorganizing rail service, the project spurred new development of housing, businesses, and lifestyle amenities across Kalispell’s Core Area, while enhancing rail access for businesses. An estimated $200 MM in private redevelopment is complete, underway, and in the planning stages as a direct result of the project, transforming the area socially, economically, and environmentally for the City’s 24,500 residents and more than 3 million visitors annually.

The awards, which were presented during the ACEC’s Engineering Excellence Awards (EEA) Dinner and Gala awards show, on Tuesday, May 24, 2022, at the Grand Hyatt in downtown Washington, DC. Congratulations to Project Manager Mark Rohweder and the rest of the project team on this exciting achievement!