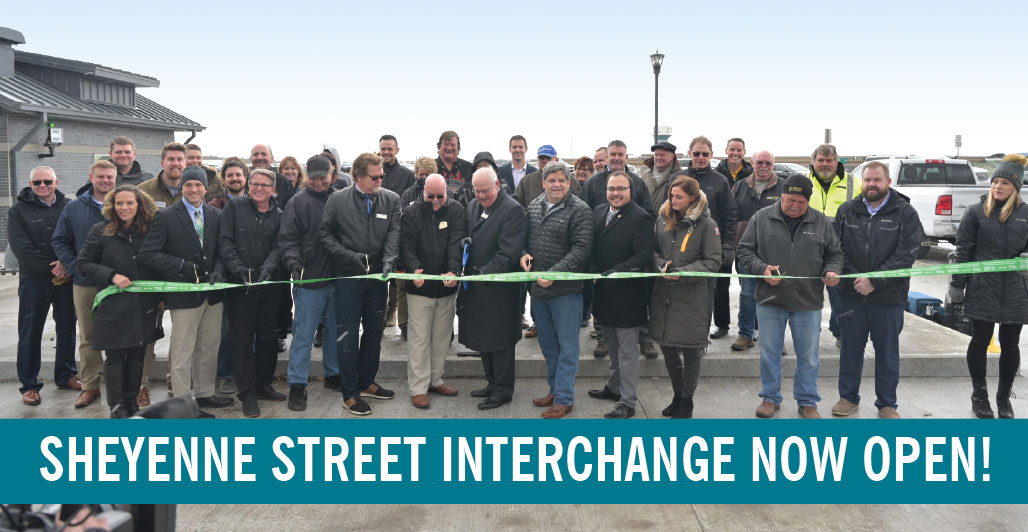 A ribbon-cutting ceremony was held this week to signify the completion and opening of the newly-expanded Sheyenne Street corridor in West Fargo, North Dakota.

After nearly two years of construction, Sheyenne Street, from 13th Avenue to the Interstate 94 interchange, has been upgraded. KLJ’s project team designed and oversaw construction of the project, which widened Sheyenne Street from two lanes to six lanes in some segments, implemented a modified single point urban interchange, and incorporated a shared-use pedestrian and bike path that connects to other pedestrian paths within the metro. In 2018, a majority of the underground storm sewer system was installed and embankment and ramp construction was initiated for the interchange. This year, the storm sewer system was finalized and connected to the new lift station and the corridor was paved and linked to the new interchange.

The entire project, from planning and conceptualization to construction completion, took less than five years. The enhancements to Sheyenne Street increase safety and capacity along the entire north-south length of West Fargo, increase pedestrian connectivity, minimize backups – especially at the interchange, and significantly reduce delays and crash potential.

In the past 20 years, West Fargo’s population has more than doubled. Sheyenne Street has evolved from a rural roadway to a bustling urban artery with approximately 50 percent of West Fargo’s population living in residential neighborhoods along the corridor. The updated transportation system drastically enhances safety for all users and it is expected to adequately accommodate the current and anticipated traffic capacity for at least 45 years.